The article above was written by: Prince Peter Alexeivitch Kropotkin, recipient of the Gold Medal of Russian Geographical Society, 1864; crossed North Manchuria from Transbaikalia to the Amur, 1864; author of General Sketch of the Orography of East Siberia; In Russian and French Prisons; Recent Science in the Nineteenth Century; and Memoirs of a Revolutionist.

By the way...
Some Quotations on Moscow

"Moscow, breathing fire like a human volcano with its smouldering lava of passion, ambition and politics, its hurly-burly of meetings and entertainment... Moscow seethes and bubbles and gasps for air. It's always thirsting for something new, the newest events, the latest sensations. Everyone wants to be the first to know. It's the rhythm of life today."
-- Svetlana Alliluyeva (1925- ), Russian writer, in her: Twenty Letters to a Friend

"Moscow... what surge that sound can start
In every Russian's inmost heart!"
-- Aleksander S. Pushkin (1799-1837), Russian poet and writer, in: Eugene Onegin 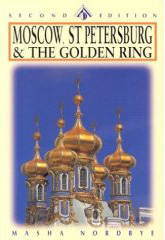 "Indispensable...takes the traveler on a splendid journey through the extensive map of the Russian soul."
-- Isabel Allende

As the symbolic heart of Russia, Moscow, which recently celebrated its 850th anniversary, has enjoyed a renaissance as one of the world's great cities. The capital's once somber streets now buzz 24 hours a day with purposeful activity, and joint ventures between east and west have already opened plush new hotels, internationally-stocked shops, and well over 1,000 eating establishments. Her sister-city, St. Petersburg, host of Russia's Golden Age and cradle of revolution, and surely Russia's soul, celebrates its 300th anniversary in 2003. One of the most graceful and well-proportioned cities in the world, filled with baroque and classical architecture, intersected by canals, it is easy to see how St. Petersburg became the inspiration for musicians, artists and writers such as Rimsky-Korsakov, Pushkin and Dostoevsky.

This book contains a wealth of information on the two cities and the regions surrounding them: fully updated histories and cultural connections of the cities, information on finding accommodation, shopping and restaurants, details of museums, architectural landmarks and theatre and comprehensive tours of each city. Also included is an indispensable guide to the Golden Ring, a series of ancient Russian towns set in the stunning countryside around Moscow.

• Second edition of a best-selling guide with detailed cultural, historical, religious and political studies of these fascinating cities • An itinerary to the Golden Ring of ancient Russian towns surrounding Moscow • Indispensable facts and practical information for the traveler • Literary excerpts from writers such as Alexandre Dumas, Alexander Pushkin and Fyodor Dostoevsky • Special topics include essays on the Russian Circus, the Trans-Siberian Railroad, Catherine the Great and the Siege of Leningrad • This edition coincides with the 300th anniversary celebrations of the founding of St. Petersburg • 126 color photos • 16 easy-to-use maps and plans